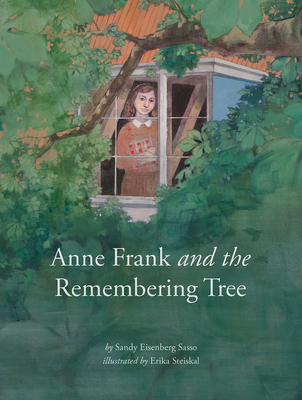 In most windows I saw people working and children playing. When the soldiers came, people began covering their windows, so I couldn't see inside anymore. But the tiny attic window of the narrow brick house behind Otto Frank's business offices had no shade. For a long time the rooms were empty. Then one day, Otto's whole family came to live there. They called their new home the Secret Annex...

A story of Anne Frank, who loved a tree and the tree who promised never to forget her.

This book is co-published with the Children's Museum of Indianapolis, chosen by the Anne Frank Center as the first U.S. recipient of a sapling from the tree outside of the Secret Annex window (the tree is the narrator in the book).

Sandy Eisenberg Sasso is an award-winning author of thirteen books for children, including God's Paintbrush, The Shema in the Mezuzah (winner of a National Jewish Book Award), and Creation's First Light. Visit her at www.allaboutand.com.

Erika Steiskal grew up in Ohio and received a BFA in illustration from the Columbus College of Art and Design. Her book and editorial illustrations have appeared in Spectrum, 3x3, and Communication Arts, and her work received a gold medal from the Society of Illustrators Los Angeles. She lives in Seattle.
"The Remembering Tree is steeped in the notion of radical empathy. The book concludes with "the promise of two young girls who loved a tree and the tree who remembered them." In Sasso's lyrical and moral vision, Anne Frank's beloved chestnut tree serves as witness, persona, and educator. This gentle, powerful book deserves to be a classic work about tolerance for children and educators of all faiths." --Amy Gottlieb, Tikkun Daily
— Reviews

When Stars Are Scattered (Paperback)

This heartfelt, authentically moving memoir of Somali refugees will grab your heart and not let go! Readers will be on the journey with Omar and his brother through hardship, heartbreak, multiple setbacks, but ultimately triumphing in their quest for a permanent home. This graphic novel packs an emotional wallop so be ready to take these boys into your heart!