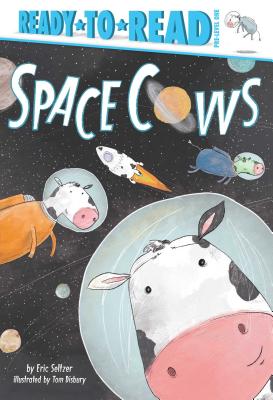 
Available to Order from Our Warehouse
Cows in space: What’s not to love? This Pre-level 1 Ready-to-Read is all about space cows and the wacky and fun things they do!

Read all about space cows in this book for beginning readers who like to giggle!
Eric Seltzer’s The Long Dog received a starred review from the Bulletin of the Center for Children’s Books. It is a Gryphon Honor Book and has been translated into Spanish. He has written a number of well-received early readers including the Doodle Dog series. His title Four Pups and a Worm is an IRA/CBC Children’s Choice and has been translated into Chinese. Eric resides with his family in Michigan.

Tom Disbury has written and illustrated a number of children’s books. When he’s not drawing, he likes to watch as many movies as humanly possible, drink coffee, and create amazing sandwiches. Tom lives in Rugby, UK, with his wife, son, and two dogs, Wilma and Fred.

Pick this book up if you have even a passing interest in witches, Nigeria, leopard-people, & magic. Nnedi Okorafor brilliantly depicts teenage self-discovery with a uniquely non-European lense & adds not a little, bbut a LOT of magic. Fitting in with physical differences is hard enough, but add a mogical society surrounding African Jujuism & pursuit of a serieal killer in the mix & you've got one heck of a complicated coming of age story. Seriously recommend.