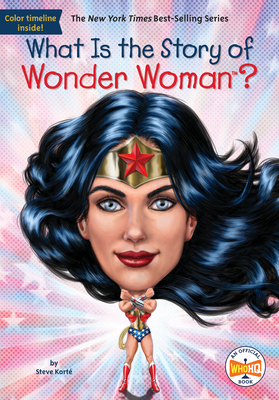 
Recently On Our Shelves
Your favorite characters are now part of the Who HQ library!

Wonder Woman--DC Comics' greatest female superhero--flies onto our What Is the Story Of? list.

She is a founding member of the Justice League, a goddess, and an ambassador of the Amazonian people. Wonder Woman burst onto the comic book scene during World War II. For more than seventy years, she has been fighting for equality, power, and truth with her lasso of truth in one hand and her sword in the other. Author Steve Korté shares the story of how one of the first and foremost superheroines was created, and how she came to be such a powerful feminist icon.
Steve Korté worked as an editor with DC Comics for many years. He is now a freelance writer and has written books for Capstone Press, DC Comics, Dorling Kindersley, HarperCollins, Little, Brown and Company, Scholastic, Simon & Schuster, and Warner Bros. He lives in New York City.

The Barren Grounds: The Misewa Saga, Book One (Paperback)

This fantastic series opener about Indigenous foster kids set in Canada - - will creep into your soul, thump thump thump, like a beating drum or eagle wings taking flight or your pounding heartbeat – in this Narnia-inspired fantasy. 13 year old Morgan has seen it all as she has bounced around after a succession of failed foster homes since very early childhood. She reluctantly has agreed to her foster parents to help watch 12-year old new foster child – Eli – as he navigates middle school, where she comes to discover his amazing drawing talent. As kids tend to do when bored, they enter the attic at home that has an unexplained painted-over doorway, and whoosh…….in comes the cold, frost and snow from beyond. Joseph’s drawing of a winter forest has come alive including talking and walking squirrels, fishers and bears, among other animal elders.