The Cycle of the Red Moon Volume 1: The Harvest of Samhein (Paperback) 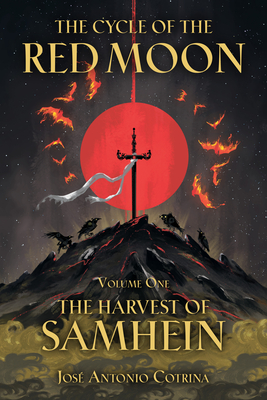 The fantasy trilogy that took Europe by storm!

Twelve teenagers from around the world fall under the spell of a demigod and journey to a mystical realm of devastation and cruelty where they must survive until the Red Moon returns. Despite the perils, these kids do not intend to surrender--they have magic on their side, and the time has come to take initiative! But an evil older than the kingdom itself awakens among the ruins, and the Red Moon approaches...

After a long, hard-fought war, Rocavarancolia languishes, a city in ruins. There are no more dragons in the skies; vampires are dying of thirst; and magic is no longer strong enough to hold the Kingdom together.

There is a sliver of hope, however. This year, same as every year, Rocavarancolia's demiurge plans his Harvest. He travels to Earth, where he masterfully cons a group of teenagers to return with him to his world, where they are then left to fend for themselves. They are told they must survive the many dangers of Rocavarancolia until the Red Moon appears in the sky. And that, for the last thirty years, no one has ever made it that far.

Why was this group chosen? What makes them special? Why are they so important? And should they survive, what will happen once the Red Moon arrives? Hector, Alex, Marina, Bruno and the others search for answers while fighting for their lives in the crumbling city. Soon they will realize they are so much more than they seem: Natalia sees hidden creatures in the shadows; Marina glimpses into the future; Bruno wields magic with astounding talent... The old inhabitants of the city watch anxiously from a distance. This Harvest is Rocavarancolia's only chance.

But one by one they fall. Death awaits in every shadow and Rocavarancolia has no mercy, no place for the weak. The city is made of darkness and, slowly but surely, its nature infects the survivors. Rocavarancolia poisons them, transforms them and tears away all remnants of humanity.

José Antonio Cotrina is a Spanish writer, focused mainly on the fantasy, science fiction and horror genres. He is best known for his novels set in the Between the Lines Universe and for his trilogy, The Cycle of the Red Moon.

Destruction takes time. From decades to millennia, each character in Sabaa Tahir's third book has been waiting for the perfect moment to strike and the world is forever going to be changed by their revenge. Sabaa clearly planed her destruction well because I am not sure I can recover from her carefully planed betrayals, prophecies, and heart-pounding moments. This will not disappoint any long-suffering fan. - Jessica