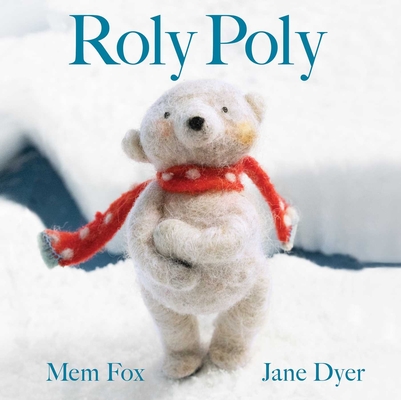 Roly Poly the polar bear gets a little brother he did not ask for, in this charming story about sibling rivalry and the bonds of family from the beloved picture book creators of Time for Bed, Mem Fox and Jane Dyer.

Roly Poly the polar bear loves being an only child. His bed is only his. The fish he catches are only his. And he doesn’t have to share his toy walrus tooth with anyone. But then along comes baby Monty. Roly Poly did not ask for a little brother and he certainly does not want one now! What is Roly Poly to do when Monty starts making him share his bed and fish and walrus tooth?

Mem Fox is an educator and international literacy expert, and her many acclaimed picture books for young children include Yoo-Hoo, Ladybug!; Hello Baby!; Baby Bedtime; I’m an Immigrant Too; the bestselling modern classics Ten Little Fingers and Ten Little Toes and Time for Bed; and, for adults, Reading Magic: Why Reading Aloud to Our Children Will Change Their Lives Forever. She lives in Adelaide, Australia. Visit her at MemFox.net.

Jane Dyer is the illustrator of many books for children, including When Mama Comes Home Tonight, Sophie’s Masterpiece by Eileen Spinelli, Roly Poly by Mem Fox, and the New York Times bestselling Cookies series by Amy Krouse Rosenthal. She lives in Northampton, Massachusetts.

A young polar bear learns to accept his role of big brother to a new arrival in his family....In a departure from her signature watercolors, Dyer has created charming, needle-felted polar bears as the characters, photographed with tiny accessories in miniature rooms or snowy, outdoor settings. Fox’s spare text demonstrates her deep understanding of a youngster’s intense emotions, subtly showing Roly Poly’s growth from a self-centered toddler to a big brother who can take responsibility for a younger brother he has grown to love. A new classic for new big brothers and sisters.
— Kirkus Reviews, Starred Review

In this sprightly offering from the team behind Time for Bed, Roly Poly the polar bear thinks life is “grand”—until the morning he learns that the wee bear sharing his bed is his new brother, Monty: “But I never asked for a baby brother, and I don’t want one now!”....Fox’s spare, wry text leaves readers ample room to embellish and personalize the story, while the mixed-media illustrations humorously portray the siblings’ interactions. Dyer fashioned the bears using needle felting, a process that involves poking raw wool with a barbed needle to alter the density of its fiber, and Birdsall (the Penderwicks series) helped Dyer stage the scenarios and then photographed them. The resulting, beguiling images have a 3-D quality and authentically capture the jumbled emotions that accompany the arrival of a sibling.
— Publishers Weekly

A fun new graphic novel for fans of The Witch Boy that follows a young girl who discovers she is a witch in the modern day. But her town has a centuries-long history of  anger, resentment, and fear of these independent women with magical powers. But the witch community may not be as welcoming when compared to the town. This story looks at how to relate to history and family in a fun new way. And don't forget the talking fat black cat! - Jessica