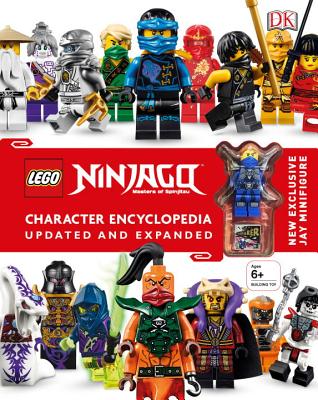 Explore the world of LEGO® NINJAGO® and the characters and vehicles in this #1 New York Times bestseller that contains an exclusive Jay minifigure and 48 new pages.

Read each character's ninja file to learn what makes each one special and unique, and find out which weapon each ninja uses. From Ninja to Nindroids to Sky Pirates, each character has a brilliantly-photographed page filled with amazing facts and trivia, such as which minifigure is the rarest and which minifigure can be found in the most LEGO NINJAGO sets.

Join the Masters of Spinjitzu and discover the secrets of the vehicles, weapons, and locations that make up the LEGO NINJAGO world with LEGO NINJAGO: Character Encyclopedia, Updated Edition.

DK was founded in London in 1974 and is now the world's leading illustrated reference publisher and part of Penguin Random House, formed on July 1, 2013. DK publishes highly visual, photographic nonfiction for adults and children. DK produces content for consumers in over 87 countries and in 62 languages, with offices in Delhi, London, Melbourne, Munich, New York, and Toronto. DK's aim is to inform, enrich, and entertain readers of all ages, and everything DK publishes, whether print or digital, embodies the unique DK design approach. DK brings unrivalled clarity to a wide range of topics with a unique combination of words and pictures, put together to spectacular effect. We have a reputation for innovation in design for both print and digital products.   Our adult range spans travel, including the award-winning DK Eyewitness Travel Guides, history, science, nature, sport, gardening, cookery, and parenting. DK’s extensive children’s list showcases a fantastic store of information for children, toddlers, and babies. DK covers everything from animals and the human body, to homework help and craft activities, together with an impressive list of licensing titles, including the bestselling LEGO® books. DK acts as the parent company for Alpha Books, publisher of the Idiot's Guides series and Prima Games, video gaming publishers, as well as the award-winning travel publisher, Rough Guides.

An utterly delightful rom-com that has thoughtful Janna, soon to be starting college in the fall, coordinating her brother's almost-wedding ceremony with friends, family and a trio of possible love interests. A hysterically funny first chapter -- literally laugh-out-loud - will pull readers in immediately to stand by Janna as she navigates her faith, family struggles and heart in this strong follow-up sequel to her debut Saints and Misfits.