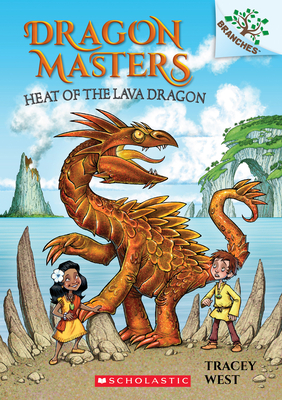 This is book number 18 in the Dragon Masters series.

Drake and Ana must find a Lava Dragon in the latest adventure in this action-packed, bestselling series!

Pick a book. Grow a Reader!

Evil wizard Astrid has trapped Drake's friends in stone and she is getting closer to casting an even more dangerous spell! To stop her, Drake and Ana travel in search of Ka, a mysterious and greatly feared Lava Dragon. But who is Ka's Dragon Master? Can a young girl find the dragon and stop Astrid -- before it's too late?

Tracey West has written more than 300 books for children and young adults, including the New York Times bestselling Dragon Masters series, the Pixie Tricks series, and the Hiro's Quest series. She has also appeared on the New York Times bestseller list as author of the Pokémon chapter book adaptations. Tracey lives with her family in New York State's western Catskills. She can be found on Twitter and Instagram @TraceyWestBooks and on Facebook @AuthorTraceyWest.

Praise for Rise of the Earth Dragon (Dragon Masters #1):"In this first of the Dragon Masters series, vocabulary is accessible; sentences, paragraphs, and chapters are short; and dialogue moves the story along rapidly. Black-and-white sketch-type drawings add depth to the story and feelings to the characters (both children and dragons). Emergent readers will find happy success here." -- Booklist"The first of a new series of early chapter books, this entry is sure to attract fans. Brief chapters, large print, lots of action, attractive illustrations in every spread including a maplike panorama, an enviable protagonist -- who wouldn't want to be a Dragon Master? -- all combine to make an entertaining read. With plenty left to be resolved, the next entry will be eagerly sought after." -- Kirkus Reviews

I had such a BLAST with this book. This book is an oral history of a hugely-popular fictional rock band from the 70s--which, by the end of the book, you can hardly believe isn't a real band!! This book is so darn comfortable to sink into, and it’s so weirdly entertaining to watch this band have all of its meltdowns and successes, all its failures and triumphs. You get to know each of these characters and their quirks so well that by the time Daisy Jones and the Six are performing onstage, you feel like you're right there in the audience as a fan. You get to be part of all the moments that make a rock band go down in history… What a blast!!

Truly, the only problem I have with this book is that there isn't a Daisy Jones and the Six album to listen to along with it.....