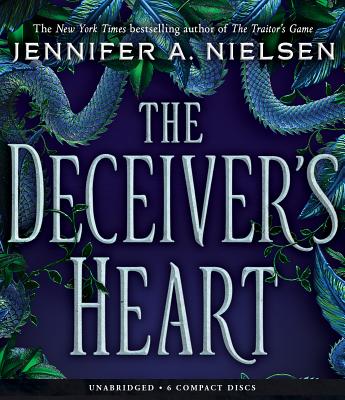 Critically acclaimed author Jennifer A. Nielsen delivers the gripping second installment of her New York Times bestselling epic young adult fantasy.
In this sequel to the instant New York Times bestseller The Traitor's Game, Kestra Dallisor has finally gained possession of the Olden Blade. With the dagger in her control, she attempts to destroy the tyrannical Lord Endrick. But when Kestra fails, the king strips her of her memory, and leaves her weak and uncertain, bound to obey him. Heartbroken, Simon is desperate to return Kestra to the rebel she was, but refuses to use magic to heal her. With untrusting Coracks and Halderians threatening to capture and kill her, and war looming on the horizon, Kestra and Simon will have to learn to trust each other again if they have any hope of surviving. But can a heart once broken ever be healed?

The Deceiver's Heart marks a stunning return to Jennifer A. Nielsen's gorgeously rendered world of Antora and all its treachery and magic.

Jennifer A. Nielsen is the acclaimed author of the New York Times and USA Today bestselling Ascendance Trilogy: The False Prince, The Runaway King, and The Shadow Throne. She also wrote the New York Times bestselling Mark of the Thief trilogy: Mark of the Thief, Rise of the Wolf, and Wrath of the Storm; the stand-alone fantasy The Scourge; the historical thrillers A Night Divided, Resistance, and Words on Fire; the second book in the Horizon series, Deadzone; Book Six of the Infinity Ring series, Behind Enemy Lines; and The Traitor's Game series: The Traitor's Game, The Deceiver's Heart, and The Warrior's Curse. Jennifer lives in northern Utah with her husband, their three children, and a perpetually muddy dog.

Wow oh wow, this book is so special, and so lovely, and so dear. This book is a gift to the world. In Prince and the Dressmaker, we meet Prince Sebastian of Paris, who is working hard to uphold a good image for the kingdom with a lot of weight on his shoulders. And part of that weight is his biggest secret: at night, he dresses in stunning gowns and becomes Lady Crystallia, a Parisian icon of fashion and beauty! Not a soul knows Sebastian’s secret, until the palace’s new dressmaker Frances discovers his secret, and the two become best friends, working together to create more and more stunning dresses and looks for Lady Crystallia, until this secret begins to conflict with Frances’ dream of becoming a world-renowned dressmaker... This book is gorgeously drawn and fantastically written, a story of love, friendship, and most of all, being true to yourself. This book is an absolute fairytale!