Sarah and the Big Wave: The True Story of the First Woman to Surf Mavericks (Hardcover) 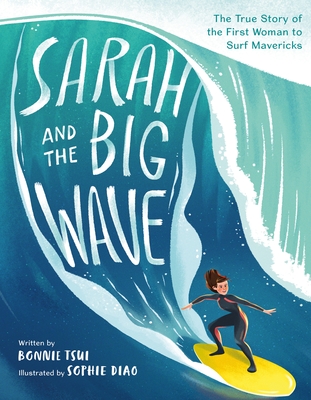 Sarah and the Big Wave: The True Story of the First Woman to Surf Mavericks (Hardcover)

This stunning nonfiction picture book tells the inspiring story of Sarah Gerhardt, one of the first female big-wave surfers.

Have you ever seen a big wave? One that’s twenty, thirty, forty, even fifty feet tall? Here’s a better question: Would you ever surf a big wave? Sarah Gerhardt did—and this is her story.

Sarah and the Big Wave, a tale of perseverance and indomitable spirit, is about the first woman to ride the waves at Mavericks, one of the biggest and most dangerous surf breaks in the world.

Bonnie Tsui is a debut children's author and a writer for The New York Times. Her books for grown-ups include Why We Swim and the award-winning American Chinatown. She lives in the Bay Area.

Sophie Diao is an artist in San Francisco. As research for the book Sarah and the Big Wave, she surfed a wave that she's pretty sure was over one foot tall. She loves illustrating natural wonders and is the talent behind many a Google Doodle.
"A determined young woman seizing the moment in vast, teal-blue ocean is a natural draw, and with the IOC adding surfing to its roster of events, librarians can expect extra interest when the next Olympic games are played." —The Bulletin of the Center for Children's Books

Behold! A pure delight for the eyes!. The dream team of Mac Barnett & Marla Frazee executes a perfect landing in a book about trying, running away, reinvention and facing fears. A design delight that can be handed to the youngest reader for their utter enjoyment. ZZZZZZZZZZgreatest.