Arlo Finch in the Lake of the Moon (Paperback) 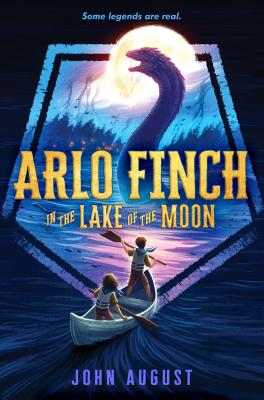 This is book number 2 in the Arlo Finch series.

“The mysteries of the Long Woods deepen in this surprising sequel as Arlo and friends head off to Camp Redfeather for the summer. It’s a camping experience just like you remember — if your summer camp came with doppelgängers, time travel, and a lake monster! Author John August’s masterstroke is making us love Arlo Finch in the Lake of the Moon even more than the first book in the series. Anyone who read and enjoyed Arlo Finch in the Valley of Fire is going to devour book two.”
— Gibran Graham, The Briar Patch, Bangor, ME

From acclaimed screenwriter John August, Arlo Finch in the Lake of the Moon continues the spellbinding fantasy adventure series about the magic that lies just beyond our world.

Something was coming. Arlo felt certain about that.

For Arlo Finch and the Rangers of Pine Mountain Company, summer camp is more than canoeing and hiking. It’s also a chance to search for ancient forest spirits and discover mysterious messages encoded in tree bark. But when Arlo and his best friends Indra and Wu stumble upon clues about the long-lost Yellow Patrol, Arlo uncovers a stunning history that leads right back to his very own family.

Born and raised in Boulder, Colorado, John August earned a degree in journalism from Drake University and an MFA in film from USC. As a screenwriter, his credits include Big Fish, Charlie’s Angels, Charlie and the Chocolate Factory, Corpse Bride and Frankenweenie. His books include Arlo Finch in the Valley of Fire.

In addition to his film career, he hosts a popular weekly podcast, Scriptnotes, with Craig Mazin. He also created the Writer Emergency Pack, an educational storytelling tool that was distributed to over 2,000 classrooms in partnership with non-profit literacy groups like 826LA and NaNoWriMo. John and his family live in Los Angeles.

“A quick and exciting read that promises more to come in a third volume.” —Booklist

Praise for Arlo Finch in the Valley of Fire:

“Accomplished screenwriter August artfully thrusts readers into a whole new world, right alongside Arlo . . . This is just the first volume in a new series, so readers won’t have to wait long to plunge back into the mysterious Long Woods.” —Booklist

“Much like other popular series such as 'Percy Jackson,' [this is] an exciting fantasy novel grounded in reality with a strong emphasis on friendships and great characters. This new series will appeal to fans of mystery and adventure as well as reluctant readers.” —School Library Journal

“The mysteries—from what makes Arlo a target to why a girl who vanished years ago has reappeared to him and only him—become increasingly more compelling as more pieces are revealed . . . Readers will find Arlo relatable, especially if they’ve ever struggled to fit in themselves.” —The Bulletin of the Center for Children's Books

“A masterful mix of mystery and adventure, set in a supernatural scouting troop. Reading this book made me wish I hadn't dropped out of Cub Scouts.” —Geoff Rodkey, New York Times–bestselling author of the Tapper Twins series

A note of caution: this book will ensnare your life and you won’t be able to put it down until the final, anxiety-filled page is turned. On the surface, this is a pretty straightforward mystery: A supermodel with a troubled past is deemed by the police to have committed suicide when her body is found on the ground below the balcony of her posh London flat. But her brother thinks something more sinister is at play and enlists the help of private detective Cormoran Strike. But this book is anything but straightforward. Strike, a paraplegic war veteran investigates every claim with the precision he learned in the military. He also has a troubled past… his late mother lead a life riddled with addiction and adversity. And as Strike delves further into the life of the troubled model, his own past demons and memories color his investigation. Not only is this mystery masterfully written, plotted out, and riveting, it speaks authentically to a multitude of issues like how society judges women who lead unconventional lives, psychological trauma, and the trials and intricacies of family. (Also, this book was actually written by J.K. Rowling under a pseudonym). - Linnea