Narwhal: Unicorn of the Sea (A Narwhal and Jelly Book #1) (Paperback) 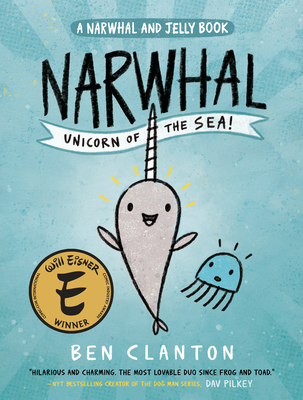 Narwhal: Unicorn of the Sea (A Narwhal and Jelly Book #1) (Paperback)

This is book number 1 in the A Narwhal and Jelly Book series.

“Hilarious and charming. The most lovable duo since Frog and Toad.” —NYT-bestselling creator of the Dog Man and Captain Underpants series, Dav Pilkey

Narwhal is a happy-go-lucky narwhal. Jelly is a no-nonsense jellyfish. The two might not have a lot in common, but they do they love waffles, parties and adventures. Join Narwhal and Jelly as they discover the whole wide ocean together.
A wonderfully silly early graphic novel series featuring three stories. In the first, Jelly learns that Narwhal is a really good friend. Then Narwhal and Jelly form their own pod of awesomeness with their ocean friends. And finally, Narwhal and Jelly read the best book ever -- even though it doesn't have any words...or pictures!
Ben Clanton showcases the joys of friendship, the benefits of working together and the power of imagination in the delightful Narwhal: Unicorn of the Sea.
BEN CLANTON is the New York Times bestselling author and illustrator of the Narwhal and Jelly series, whose picture books include Mo's Mustache; Vote for Me!; Rot, the Cutest in the World!; Boo Who?; It Came in the Mail; Something Extraordinary and Rex Wrecks It!. He lives with his wife and kids in Seattle, Washington.

PRAISE FOR Narwhal: Unicorn of the Sea:

“Undersea adventures have never been so darn cute .... The incessant charm and unabashed joy should make this an easy sell. Swimmingly delightful and a guaranteed smile-maker.” --Starred Review, Kirkus Reviews

“An utterly enchanting start to a series that’s bound to be popular among young readers.” --Starred Review, School Library Journal

“Geez, Narwhal and Jellyfish are adorable. There’s no other word as appropriate for this duo… readers will likely clamor for the next outing.” –-Starred Review, Bulletin of the Center for Children’s Books

“Readers ready for underwater goofiness of the non-SpongeBob variety will be eager for more adventures from this duo.” --Publishers Weekly

Could there be a better young adult historical fiction storyteller than Stacey Lee? The Downstairs Girl rings with honesty about the plight of Jo Kwan, living in Atlanta in 1890 in an abandoned basement below an unsuspecting family that runs one of the town's newspapers. Jo becomes the unseen advice columnist "Dear Miss Sweetie" as she uses her considerable wit to answer letters - all the while working as a maid to a privileged and cruel teen. Romance, racial inequities and family squabbles all result in Lee's outstanding development into a glimpse of Atlanta's storied genteelness. This is a sure winner!