She Dared: True Stories of Heroines, Scoundrels, and Renegades (Paperback) 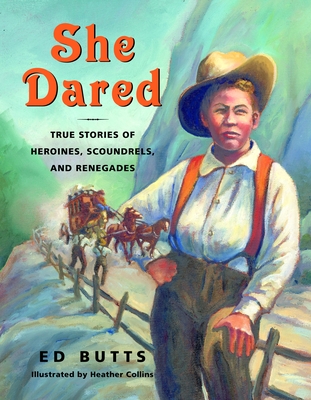 She Dared: True Stories of Heroines, Scoundrels, and Renegades (Paperback)


NOT AVAILABLE
From a true-life “Survivor Island” tale to the women who flew fighters and bombers for the Allies in World War II, Ed Butts invites you to meet twelve women who dared to live their lives on a tightrope. She Dared takes the reader to the Far North, where a single Native woman put an end to a ruinous war. There’s Molly Brant, who stepped out of the shadow of her famous brother Joseph to make her own mark, and Dr. “James Barry,” a prominent army physician whose true identity remained a secret until the day “he” died.

These are the stories of women who took up challenges that society felt could be met only by men: Mina Hubbard’s incredible journey across Labrador; Martha Black’s adventures in the Yukon; Sara Emma Edmonds’s perilous missions as a Yankee spy in the Civil War.

While some of these women achieved legitimate fame, others gained notoriety. Pearl Hart became a Wild West desperado. Cassie Chadwick fleeced bankers for a fortune in one of the most brazen con games ever played.

Famous or infamous, the women in Ed Butt’s fascinating book are sure to intrigue readers.
Ed Butts is a writer and editor with a special interest in Canadian history. He lived for several years in the Dominican Republic, where he taught English and social studies and wrote regularly for local magazines. He has published several books of fiction and non-fiction and has written for numerous publications in Canada and the United States. Ed Butts lives in Guelph, Ontario.

Heather Collins has been drawing since she was very young. She has illustrated over forty children’s books over the past twenty years. She is the recipient of the 1995 Information Book Award and the 1995 Ruth Schwartz Children’s Book Award (Picture Book Category) for A Pioneer Story: The Daily Life of a Canadian Family in 1840. Originally from Montreal, Heather Collins lives in Toronto with her husband and two children.

The Okay Witch and the Hungry Shadow (Paperback)

Moth may be a witch, but her secret power doesn't prevent her from being bullied at school. When her grandmother witch accidentally reveals a bit of forbidden magic that has the ability to change Moth, the quest to fit in begins. As the changes start to take over Moth, the question becomes where does the real-Moth end and the invading magic begin?