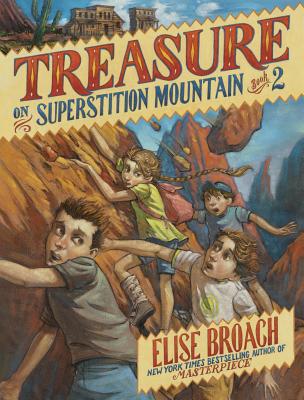 This is book number 2 in the Superstition Mountain Mysteries series.

Even though Henry Barker and his two brothers learned firsthand that the urban legend about danger on nearby Superstition Mountain wasn't just a myth, this doesn't stop them from planning their return. Along with their friend Delilah, the Barker brothers soon find themselves entangled in more danger and mystery as they uncover a real treasure, but the discovery comes at a very big price—they barely survive an avalanche. The question remains—is someone after them, or is the mountain seeking revenge?
Treasure on Superstition Mountain is the second book in Elise Broach's Superstition Mountain series.

Elise Broach is the New York Times bestselling author of Masterpiece, Shakespeare’s Secret and Desert Crossing, Missing on Superstition Mountain, the first book in the Superstition Mountain Trilogy, as well as several picture books. Her books have been selected as ALA notable books, Junior Library Guild selections, a Publishers Weekly Best Children’s Book, a New York Public Library Best Book for the Teenage, an IRA Teacher’s Choice, an E.B. White Read Aloud Award, and nominated for an Edgar Award, among other distinctions.

Ms. Broach holds undergraduate and graduate degrees in history from Yale University. She was born in Georgia and lives in the woods of rural Connecticut, walking distance from three farms, a library, a post office and two country stores.

Antonio Javier Caparo has illustrated many books for children, including the Magic Thief series and The Young Reader’s Shakespeare: A Midsummer Night’s Dream. He lives in Montreal, Canada.

“With the unusual setting, the lure of mystery and adventure, and a certain innocence reminiscent of the Boxcar Children series, this story should find a ready audience.” —Booklist on Missing on Superstition Mountain

“Broach reserves plenty of suspicious characters, spooky landscapes and loose ends for the slated sequels, which both boys and girls will savor.” —Kirkus Reviews on Missing on Superstition Mountain

Leo, age 7 said, “I really liked when the pea gets locked in the jello. It made me laugh.”

Gavin, age 5 said, “I thought it was silly when the pea got loose and made problems for everybody.”

Emory, age 4 said, “My favorite part was the dip and I want you to read it again sometime."