The Worst Witch to the Rescue (Paperback) 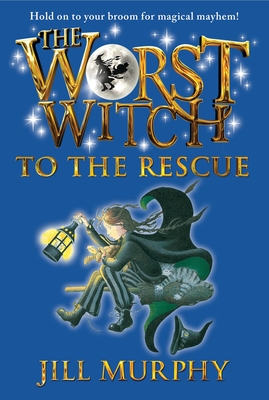 The Worst Witch to the Rescue (Paperback)

This is book number 6 in the Worst Witch series.

Lovable but accident-prone Mildred Hubble is possibly the worst witch ever to go to Miss Cackle’s Academy for Witches. In her sixth adventure, Mildred is set up for disaster by her arch-nemesis, Ethel Hallow, who steals Mildred’s summer project and her enchanted tortoise, Einstein. Are Mildred’s broomstick skills up to the task of flying in a violent thunderstorm to rescue poor Einstein?
Jill Murphy (1949-2021) began drawing and writing stories at a very early age and was already putting books together (albeit with a stapler) by the time she was six. She was only eighteen when she wrote The Worst Witch. Her books about the lovable but disaster-prone Mildred Hubble sold more than five million copies worldwide and became much-loved classics. Jill Murphy also wrote and illustrated several award-winning picture books for younger children.

How can anyone resist a talking tortoise and a good-hearted young witch? ... Readers will cheer for the bighearted Mildred when she takes huge risks to save Einstein, her tortoise friend, and he in turn saves her. An old-fashioned tone combines with Briticisms and sophisticated vocabulary to make this a fine step up from early chapter books. Distinctively detailed black-and-white illustrations grace each spread, adding humor and information to the narrative. ... Heartwarming magic with just the right touch of talking toads and tortoises.
—Kirkus Reviews

Heavily illustrated, with plenty of white space... Quite a nice facelift to a fantasy series for those not quite ready for Harry Potter.
—School Library Journal

The Ogress and the Orphans (Hardcover)

What is goodness? Is goodness only for the good and wickedness for the wicked? If the good perform wicked acts, are they still good? What is a neighbor? Is a neighbor only those which dwell next door, across town, or just outside your front door? What is goodness, when not shared with a neighbor that needs it?