Atlas of Ocean Adventures: Plunge into the depths of the ocean and discover wonderful sea creatures, incredible habitats, and unmissable underwater events (Hardcover) 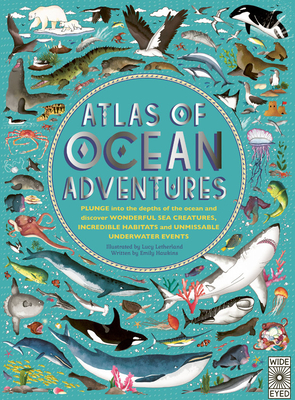 Atlas of Ocean Adventures: Plunge into the depths of the ocean and discover wonderful sea creatures, incredible habitats, and unmissable underwater events (Hardcover)


Available to Order from Our Warehouse
Set your spirit of adventure free with this journey to the world’s great oceans, discovering the diversity of life that exists in the deep blue sea.

Whether you’re traveling long haul with leatherback turtles across the Pacific, snoozing with sea otters or ice bathing with a walrus, this book celebrates the very prescient topic of the world’s oceans with LucyLetherland’s animal characters.

Each section begins with an infographic map of the ocean it explores—Atlantic, Pacific, Indian, Southern and Arctic—followed by richly detailed two-page spreads exploring its depths and the denizens within, as well as seabirds, coral reefs and shoreline critters. Discover saltwater crocodiles lurking in the Andaman Islands, hammerheads gathering in the Atlantic, and the awe-inspiring colossal squid that calls the Ross Sea home.

Lucy Letherland’s illuminating artwork shows how these oceans teem with life, forming part of complex and fascinating ecosystems, all in a quirky, characterful style.

Interesting facts and figures pepper the scenes. Did you know that spinner dolphins can swim up to 400 kilometers a day? Or that some sea snails can grow up to half a meter long? Or that in the deepest depths, fish can glow in the dark? A natural history lesson in an adventure book, each spread features 10 captions and and facts about every destination. The 5th title in the best-selling Atlas of Adventures series that has now been translated into 31 languages. A 'Can you find?' page at the back challenges you to explore the pages even deeper by locating the pictured scenes and scene-stealers.

Children and adults alike will be amazed by the incredible creatures that await in the world's oceans.

Lucy Letherland is an illustrator based in London, UK. She graduated from Manchester School of Art in 2011 with a First Class BA (Hons) in illustration with animation. Lucy's work is strongly led by humor and narrative, creating a playful, graphic quality. Her books include Atlas of Adventures, Atlas of Adventures: Wonders of the World, Atlas of Animal Adventures, and Atlas of Dinosaur Adventures.

Once a children’s book editor, Emily Hawkins is now a full-time author. Her work has been featured on the New York Times bestseller list (Oceanology, 2009) as well as winning the Children’s Travel Book of the Year Award (Atlas of Animal Adventures, 2016). Along with her background in children’s non-fiction Emily has a strong interest in myth, folklore and storytelling. In 2020 she wrote A Natural History of Fairies, which has been translated into twelve languages, selling more than 100,000 copies worldwide. Emily holds a first-class English degree from Nottingham University, and lives in Winchester, UK.

This book was a fantastic story about two kids discovering who they are and how they want to present themselves to the world. Frances is a daring seamstress who has caught the eye of Lady Crystallia a beautiful fashion trend starter. But the world doesn't know that Lady Crystallia is Prince Sebastian and Frances must decide if she wants the world to know about her work, even as it threatens to expose her friend's secrets to the world. Jen's illustrations captures the emotions of the character's so creatively. I also loved the information in the back of the book about her creative process.