Rise of the Balloon Goons (Notebook of Doom #1) (Prebound) 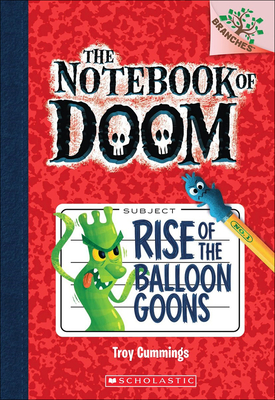 Rise of the Balloon Goons (Notebook of Doom #1) (Prebound)

This is book number 1 in the Notebook of Doom series.

Monsters + Humor + Fun = THE NOTEBOOK OF DOOM
This series is part of Scholastic's early chapter book line called Branches, which is aimed at newly independent readers. With easy-to-read text, high-interest content, fast-paced plots, and illustrations on every page, these books will boost reading confidence and stamina. Branches books help readers grow
Alexander has just moved to a new town where he is about to uncover all sorts of monsters He finds an old notebook with the word "DOOM" inscribed on the front cover. The Notebook of Doom, which Alexander now holds, contains top secret information about monsters In this first book, Alexander goes up against spooky balloon goons--unique and twisted arm-waving balloon guys This book is full of humor, engaging black-and-white illlustrations, and of course . . . monsters.
Troy Cummings has been drawing since he was a little kid. His illustrations have appeared in newspapers and magazines, on websites, on frozen-fish-stick packages, and in hospital waiting rooms. He has published two picture books so far: THE EENSY WEENSY SPIDER FREAKS OUT! and MORE BEARS! His third picture book, GIDDY-UP, DADDY! is due out in April 2013. THE NOTEBOOK OF DOOM is his first early chapter book series. He lives in Indiana with his cat and family.

This powerhouse teen graphic novel follows Becca, the new girl at school, who is immediately chosen to join the coolest clique of girls in her school. These girls are eerily close-knit and hold a secret, one that Becca is soon pulled into: the coolest girls in school are werewolves, preying on boys who take advantage of girls without consent! Squad is a classic over-the-top teen-flick storyline with a fabulous cauldron brew of horror, queer representation, and searingly relevant commentary on consent and predation, featuring young women taking back their power and holding boys accountable. The perfect read for the next full moon!