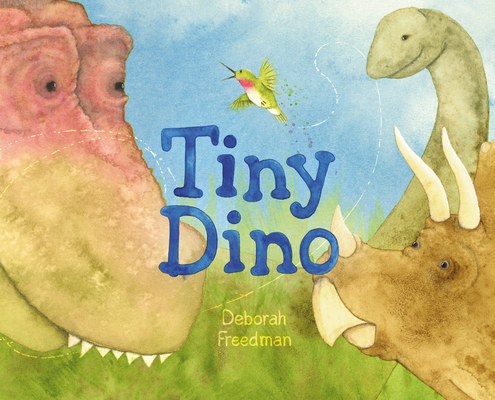 Hummingbird proudly proclaims "I'm a Tiny Dino!". And the lovely truth is revealed when scales and feathers are compared, plus bones, toes, and more. A beautiful and well-crafted combination of story and science with Deborah Freedman's characteristically soft watercolor illustrations lightly inset with facts.

Did you know dinosaurs still roam the earth?

A small but mighty bird declares it is a dinosaur! But no one believes that dinosaurs still exist. How can it be a dinosaur when it is so little? Dinosaurs didn’t have feathers . . . or did they? This tiny dino is here to explain to its animal friends that birds are, in fact, dinosaurs, and all creatures are connected to one big animal family. With a playful ensemble of animal characters and dynamic bursts of dialogue, celebrated author and illustrator Deborah Freedman has created a spirited and informative picture book for dinosaur lovers of all ages.


Deborah Freedman did not hatch from an egg and does not have hollow bones. She is not a dinosaur. But like T. rex and the hummingbird, she is a bipedal vertebrate. She is also the author and illustrator of many picture books for children, and she enjoys roaming the earth to learn new things and meet other readers. To learn more, visit deborahfreedman.net.
★ “It's an absolute delight to learn and laugh with this curious animal crew.” –Booklist, starred review

★ “An innovative introduction to the relatedness of all animals that will delight budding biologists and dino mavens alike.” –Kirkus Reviews, starred review

★ “Balancing the informative and the wondrous, the book offers a tribute to the way the interconnections among species ensure that the past remains present.” –Publishers Weekly, starred review

“This is another charmer from Freedman, seamlessly mixing nonfiction, humor, a meditation on interconnections, and a lot of heart.” –School Library Journal