Where Were the Seven Wonders of the Ancient World? (Where Is?) (Paperback) 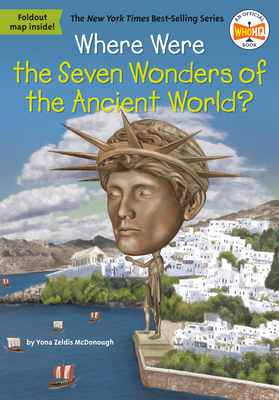 Where Were the Seven Wonders of the Ancient World? (Where Is?) (Paperback)


Available to Order from Our Warehouse
Explore the most amazing wonders of the ancient world!

More than 2,000 years ago, travelers wrote about the incredible sights they saw while on their journeys. They told tales of hanging gardens that were built for a Babylonian queen, and a colossal statue that guided ships through the harbor of Rhodes in Greece. These writers compiled a list of the very best of these sights that are now known as the Seven Wonders of the Ancient World. Author Yona Zeldis McDonough takes the readers on a trip to the Lighthouse of Alexandria and the Great Pyramids in Egypt (the only Wonder still standing), the Statue of Zeus at Olympia and the Colossus of Rhodes in ancient Greece, the Hanging Gardens of Babylon, the Mausoleum at Halicarnassus, and the Temple of Artemis, detailing the creativity and skill that these early civilizations possessed.
Yona Zeldis McDonough is the author of What Was the Underground Railroad?, Who Was Rosa Parks?, Who Was John F. Kennedy?, Who Was Louis Armstrong?, Who Was Wolfgang Amadeus Mozart?, and Who Was Harriet Tubman?

Clear your calendar for a relentless, propulsive locked-door thriller that gives the true "behind the curtain" duties & bravery of in-flight airline crew. Astonishing debut!