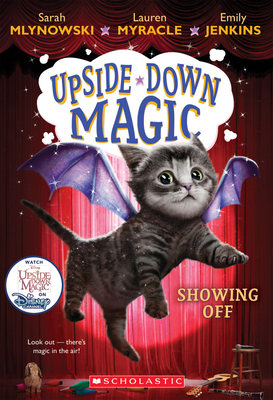 This is book number 3 in the Upside-Down Magic series.

The Upside-Down Magic kids are back in another topsy-turvy adventure in the next installment of this New York Times bestselling series, now a Disney Channel Original Movie!
Some people in school are afraid of the kids in the Upside-Down Magic class. Others just call them flops. But Nory and her friends in Upside-down Magic won't let that stop them. Not with a school-wide talent show coming up!

Except... Nory's afraid her fluxing magic will go wonky and upset her father. Pepper is worried that her abilities as a Fierce will make all the animals in the show run wild. Bax has some extreme new magic skills, but they can also be extremely embarrassing. And Elliott suspects there's a Sparkie spy who's looking to uncover UDM's talent-show secrets-and to use those secrets against them.

In order to take the stage and make some magic, the Upside-Down Magic kids are going to have to band together... and find the right combination of talents to steal the show!

Sarah Mlynowski is the New York Times bestselling author of the Whatever After series, the Magic in Manhattan series, Gimme a Call, and a bunch of other books for tweens and teens, including the Upside-Down Magic series, which she cowrites with Lauren Myracle and Emily Jenkins. Originally from Montreal, Sarah now lives in Los Angeles with her very own prince charming and their fairy tale-loving daughters. Visit Sarah online at sarahm.com and find her on Instagram, Facebook, and Twitter at @sarahmlynowski.

Lauren Myracle is the New York Times bestselling author of many books for young readers, including The Winnie Years (which begins with Ten), the Flower Power series (which begins with Luv Ya Bunches), and the Life of Ty series. She would like to be a Fuzzy so she could talk to unicorns and feed them berries. You can find Lauren online at laurenmyracle.com.

Emily Jenkins is the author of many chapter books, including the Toys trilogy (which begins with Toys Go Out) and the Invisible Inkling series. Her picture books include Lemonade in Winter, Toys Meet Snow, and The Fun Book of Scary Stuff. She would like to be a Flare and work as a pastry chef. Visit Emily at emilyjenkins.com.

"An enchanting celebration of every kid who has ever felt a little 'upside down' and the unique ways we all work our magic." -- Michael Buckley, bestselling author of The Sisters Grimm and NERDS

"Mlynowski, Myracle, and Jenkins have combined their considerable writing powers and experience to create an uplifting series launch that will charm young fantasy readers." -- Booklist

"Three top-notch writers combine their skills to tell the story of a misfit conjurer learning to accept her differences. . . . Nory is such a sympathetic and winning character." -- Children's Literature