Triceratops vs. Spinosaurus (Who Would Win?) (Paperback) 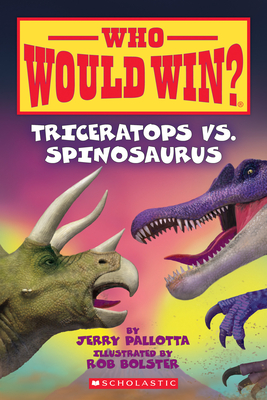 Triceratops vs. Spinosaurus (Who Would Win?) (Paperback)

This is book number 16 in the Who Would Win? series.

What if a triceratops and a spinosaurus had a fight? Who do you think would win? This nonfiction reader compares and contrasts two ferocious dinosaurs. Readers will learn about each animal's anatomy, behavior, and more. Then compare and contrast the battling pair before finally discovering the winner! This nonfiction series is full of facts, photos, and realistic illustrations, and it includes a range of mammals, sea creatures, insects, and dinosaurs to satisfy all kinds of animal fans.

Jerry Pallotta is an award-winning author of children's books, including What I Saw in the Teachers' Lounge, Dinosaur Christmas, Who Will Guide My Sleigh Tonight?, Apple Fractions,and The Hershey's Milk Chocolate Multiplication Book. His combination of interesting facts, detailed research, humor, and realistic illustrations has mesmerized countless children across the United States. You can visit him at jerrypallotta.com.

You'll get sucked into this mystery with a wry sense of humor just as curmudgeon Sheldon Horowitz does. As he reluctantly moves in with his granddaughter in Oslo, Norway, he becomes involved in protecting a young boy and in the process is changed. One of my favorites. - Nikki