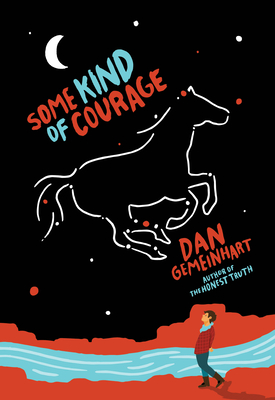 Following 12-year old recently orphaned Joseph on his quest to get his only family back -his beloved horse Sarah- author Gemeinhart brings together race relations in the late 1800's, western lore and a clear-eyed pragmatism that, coupled with his signature action/adventure plot twists and a kindheartedness thread permeating the story, this wonderful, evocative and first rate middle grade title builds on his exceptional debut (The Honest Truth). This is an author that has clearly established himself as a must read for warm hearted, realistic adventures.

The acclaimed author of The Honest Truth returns with an extraordinary novel about a boy's life-defining, death-defying journey.
Joseph Johnson has lost just about everyone he's ever loved. He lost his pa in an accident. He lost his ma and his little sister to sickness. And now, he's lost his pony--fast, fierce, beautiful Sarah, taken away by a man who had no right to take her.

Joseph can sure enough get her back, though. The odds are stacked against him, but he isn't about to give up. He will face down deadly animals, dangerous men, and the fury of nature itself on his quest to be reunited with the only family he has left.

Because Joseph Johnson may have lost just about everything. But he hasn't lost hope. And he hasn't lost the fire in his belly that says he's getting his Sarah back--no matter what.

The critically acclaimed author of The Honest Truth returns with a poignant, hopeful, and action-packed story about hearts that won't be tamed... and spirits that refuse to be broken.

Dan Gemeinhart is a teacher-librarian and father of three daughters. His debut novel, The Honest Truth, was a New York Times Editors' Choice selection, an Amazon.com Best Book of the Month, and an Indie Next List pick. His follow-up, Some Kind of Courage, was met with critical acclaim, garnering two starred reviews. Dan lives with his family in Cashmere, Washington. Visit him at dangemeinhart.com.

Praise for The Honest Truth:

A New York Times Editors' Choice selection
An Amazon.com Best Book of the Month
An Indie Next List selection

"An impressive combination of suspenseful adventure thriller and cancer narrative... Touching but unsentimental, this is a deeply moving adventure." -- Booklist


Praise for Some Kind of Courage:

*"This is true adventure with strong underpinnings of moral courage and love... Poignant and real." -- Kirkus Reviews, starred review

*"Exhilarating and enthralling, Courage promises even the most reluctant readers a breakneck adventure that will keep them turning the pages with utter devotion." -- Booklist, starred review

"This is a terrific book, morally thoughtful and wonderfully well told, that 9- to 14-year-olds are likely to cover at a gallop." -- The Wall Street Journal