Where Is Machu Picchu? (Where Is?) (Paperback) 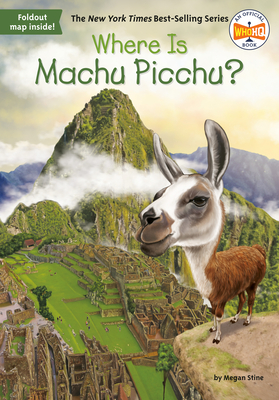 Where Is Machu Picchu? (Where Is?) (Paperback)


Available to Order from Our Warehouse
What's left of Machu Picchu stands as the most significant link to the marvelous Inca civilization of Peru. Now readers can explore these ruins in this compelling Where Is? title.

Built in the fifteenth century and tucked away in the mountains of Peru, Machu Picchu was abandoned after the Spaniards conquered the Incan empire in the sixteenth century. It remained hidden until 1911 when Hiram Bingham uncovered the marvelous complex and shared his discovery with the world. Today, hundreds of thousands of people visit the site to climb the 3,000 stone steps, explore the towering monuments, and see the numerous species that call these famous ruins home.
Megan Stine has written several books for young readers, including Where Is the White House?, Who Was Marie Curie?, Who Was Ulysses S. Grant?, Who Is Michelle Obama?, and Who Was Sally Ride? She lives in Clinton, Connecticut.

It’s always hard to wait for the next Charles Lenox mystery to come out, and they keep getting better all the time.  In this one, a man’s body is found one night in 1855 on the last train into Paddington Station, but he has no identification, luggage, or possessions and the labels are cut out of his clothes.  Where does detective Lenox start?  At the same time, Lenox is hoping that his relationship with Kitty Ashbrook will deepen.  Finch’s characters are so engaging and show all the foibles of human nature, and his Victorian London setting is as delightful as ever—you can practically taste the tea and toast and feel the creeping mists. - reviewed by Nikki