Who Was Thomas Alva Edison? (Who Was?) (Paperback) 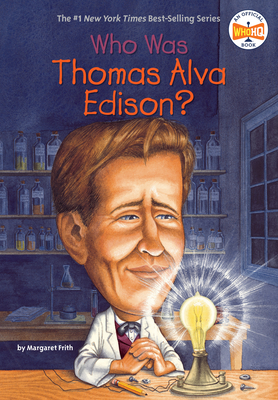 Who Was Thomas Alva Edison? (Who Was?) (Paperback)


Available to Order from Our Warehouse
One day in 1882, Thomas Edison flipped a switch that lit up lower Manhattan with incandescent light and changed the way people live ever after. The electric light bulb was only one of thousands of Edison’s inventions, which include the phonograph and the kinetoscope, an early precursor to the movie camera. As a boy, observing a robin catch a worm and then take flight, he fed a playmate a mixture of worms and water to see if she could fly! Here’s an accessible, appealing biography with 100 black-and-white illustrations.
Margaret Frith is the author of numerous children’s books, including several titles in the Who Was? series, such as Who Was Thomas Alva Edison?, Who Was Louis Braille?, Who Was Franklin Roosevelt? and Who Was Woodrow Wilson? She lives in New York City.

John O’Brien has held writing fellowships at the University of Iowa and Stanford University, and he was the recipient of a National Endowment for the Arts fellowship. His work has appeared in Hudson Review, Massachusetts Review, TriQuarterly, Country Journal, Harrowsmith, and Gray’s Sporting Journal. He lives with his wife, Becky, in Franklin, West Virginia.

Nancy Harrison is an illustrator known for the Who Is… series and for graphic illustrations for Fortune 500 Companies. Nancy received her master’s degree from Syracuse University.

Readers will love meeting Natsumi, the little spirited girl who sometimes is MORE than a bit spirited! This effective marriage of Lendroth's well-plotted story and Illustrator Buriss's brightly designed drawings will surely have readers asking for multiple tellings. A true delight!