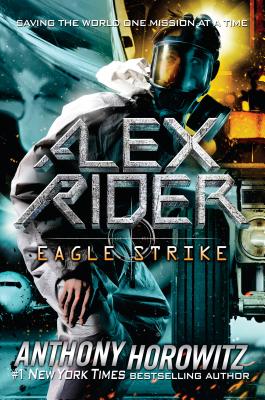 By Anthony Horowitz
$20.89
Coming from our Warehouse. Ships in 1-5 Days

This is book number 4 in the Alex Rider series.

Millions adore him.  A philanthropist.  Anti-drug crusader.  Peace activist.  And former pop star the likes of which the world has never seen.  Sir Damian Cray even has the president's car.  Yet the president's car is not enough for Damian-he wants more.  Such as the president's fingerprints.  So he can manipulate computer systems only the President of the United States has access to.  So he can launch nuclear missiles.  From aboard Air Force One.  All in the name of peace...So what if a few million lives are lost in the process?

Teen spy Alex Rider survives a bullfight, a high-speed bicycle chase through Amsterdam, and even being the target in a human video-game, only to face his most disturbing challenge yet: when the best of intentions are driven by insanity, how do you reason with a madman?

This is the final and epic end of the tales of Harry Potter. This exquisite story features the final battle between good and evil. Harry must battle his arch nemesis Voldimort [sic] for protection of the magical kingdom that Harry and his friends live in. But the question still remains, who will win? Read the book and find out for yourself. - Andrew, customer