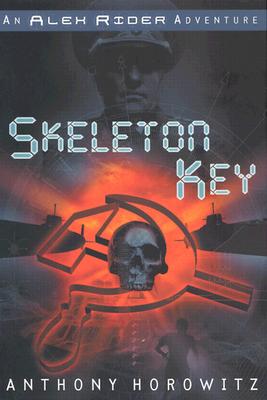 By Anthony Horowitz
$17.99
Coming from our Warehouse. Ships in 1-5 Days

This is book number 3 in the Alex Rider series.

Alex Rider has been through a lot for his fourteen years. He's been shot at by international terrorists, chased down a mountainside, and stood face-to-face with evil.  Twice, young Alex has saved the world. And twice, he has almost been killed doing it. But now Alex faces something even more dangerous. The desperation of a man who has lost everything he cared for: his country and his only son. A man who just happens to have a nuclear weapon and a serious grudge against the free world. To see his beloved Russia once again be a dominant power, he will stop at nothing. Unless Alex can stop him first.

The phenomenon that is the Alex Rider series returns with pulse-quickening action as, for the first time, Britain's MI6 and America's CIA unite forces. Be glad Alex is on our side.

For anyone wanting to try a steam punk or for steam-punk aficionados this book is ideal. Set in two distinct steam-punk worlds that have turned 19th Century European life on its head: the world of the Clankers, advanced and powerful steam-powered machines in Austral-Hungary, and that of the Beasties, genetically fabricated Darwinian creatures in Britain. The story follows Daryn, a girl disguised as a boy to enter the British Air Service so she can fly. It also follows Alek, the prince of Austral-Hungary who must flee his royal after his parents are assassinated. From two separate opposing worlds, Alek and Daryn are thrown together by extreme circumstances aboard the mighty airship, the giant hydrogen-breathing modified whale of the air the Leviathan. A roller-coaster of action and intrigue, this book is also an incredibly well thought out politically and historically. - Linnea