The One and Only Ivan Full-Color Collector's Edition (Hardcover) 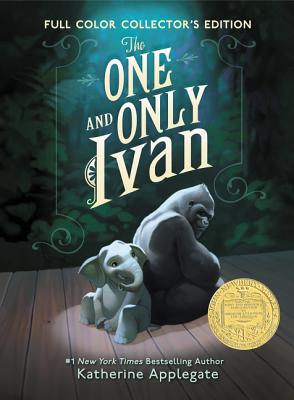 By Katherine Applegate, Patricia Castelao (Illustrator)
$24.99
Coming from our Warehouse. Ships in 1-5 Days

• Full-color interior artwork from illustrator Patricia Castelao
• A special letter from Katherine Applegate
• The Newbery Medal acceptance speech
• A letter from the real Ivan's caretaker at Zoo Atlanta
• Ivan's "signature"
• Sketches and illustrations that were not part of the original book.

Inspired by the true story of a captive silverback gorilla known as Ivan, this stirring and unforgettable novel celebrates the transformative power of unexpected friendships.

Having spent twenty-seven years behind the glass walls of his enclosure in a shopping mall, Ivan has grown accustomed to humans watching him. He hardly ever thinks about his life in the jungle. Instead, Ivan occupies himself with television, his friends Stella and Bob, and painting. But when he meets Ruby, a baby elephant taken from the wild, he is forced to see their home, and his art, through new eyes.

Hailed as a best book of the year by Kirkus, School Library Journal, and Amazon, Katherine Applegate's novel blends humor and poignancy to create this incredible tale of friendship, art, and hope told from Ivan's own point of view, in the tradition of timeless classics such as Charlotte's Web and Stuart Little.

Plus don't miss The One and Only Bob, Katherine Applegate's return to the world of Ivan, Bob, and Ruby!

Katherine Applegate is the Newbery Medal–winning and #1 New York Times bestselling author of numerous books, including The One and Only Ivan, The One and Only Bob, Crenshaw, Wishtree, the Endling series, the Roscoe Riley Rules chapter book series, and the Animorphs series, which she coauthored with her husband, Michael Grant. Katherine lives with her husband and their children in California. You can visit her online at www.katherineapplegate.com or visit www.theoneandonlyivan.com.

★ “Will capture readers’ hearts and never let go. A must have.”
— School Library Journal (starred review)

★ “Animal-loving youngsters and their adults will find plenty of food for thought in Ivan’s extraordinary story.”
— Bulletin of the Center for Children’s Books (starred review)

“Discover an animal hero that will take his place with other courageous and beloved animals such as Babe, Mrs. Frisby, Charlotte and Wilbur. Adults reading this aloud with children will find it just as rewarding.”
— Shelf Awareness

“The One and Only Ivan will break your heart—and then, against all odds, mend it again. In cheering for Ivan and his friends, we cheer for our own humanity and our own possibilities. Read this.”
— Gary D. Schmidt, Newbery Honor author of The Wednesday Wars

“A beautifully written, intelligent and brave book. You will never look at the relationship of humans and animals in the same way again. Quite simply, this story is life changing.”
— Patricia MacLachlan, Newbery Medal-winning author of Sarah, Plain and Tall

“Katherine Applegate’s beautiful, life-affirming story will soar directly from Ivan’s heart into your own. Read it out loud. Read it alone. Read it.”
— Kathi Appelt, Newbery Honor author of The Underneath

A beautifully illustrated non-fiction book that is perfect for those kids who always ask "why?". A perfect book for teachers but also sweet enough to read every night as a bedtime story. The more often you read it, the better you will be at reading large numbers! Has a wonderfully accessible back matter page. - Jessica